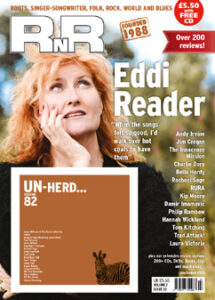 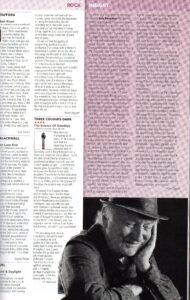 For much of a long career in the record industry, Rob Boughton has served mostly as a producer for, among others, Robin Sarstedt , Isla St. Clair and Terry Clarke. Yet, through one of those strange variables to which the business is prone, his biggest market triumphs include perhaps the most well-concealed ledgers in his artistic account – namely a UK Top Thirty entry with a spoof of ‘You’re The One That I Want’ by balusters of British comedy Arthur Mullard and Hylda Baker Kenny Lynch and I recorded both sides in 4 hours with Tony Hicks on guitar! It was just a bit of fun but it sold 150,000 in one week’ and had Japanese success with singles including a revival of ‘Whole Lotta Love’ by Blonde On Blonde – not the prog-rockers of the same name, but a pair of glamour models. After co-forming Stiletto Records in 1981 Boughton also drew resilient studio performances from Manchester’s Cindy and The Saffrons before  lead vocalist Joanne Whaley found her feet as an award-winning actress.  “We produced a cover of  the Shangrilas tear-jerker ‘Past, present and future’ which was sent out with a hankerchief’. This lead to RCA licencing Stiletto and we also had top 40 singles for Steve Harley and Birmingham band The Bloomsbury Set who toured with Duran Duran and were produced by their guitarist Andy Taylor.”

As a London teenager, Rob – then a broad-shouldered, milk-blond androgyny like Rolling Stone Brian Jones – had had aspirations to be a pop entertainer himself, but, while never totally deaf to the roar of the greasepaint, came to accept that solid cash was preferable to the ecstasy of the Great British Public. “ in the mid 70s I was co-owner of a demo studio in Reading recording local bands and writing and recording in the hours of dead time,”  Nevertheless, with a nod towards the Don Kirscher ‘bubblegum’ factory, Boughton – with multi-instrumentalist John Hardman (destined to father one of Girls Aloud) and Jon Pope, who’d passed through the ranks of Mungo Jerry – put together Sunfighter, a group that would have no physical form until a solitary appearance – with Boughton to the fore on guitar and backing harmonies – during a 1976 edition of Top Of The Pops the week after the issue of its maiden single, ‘Drag Race Queen’ produced by Queen’s Producer Roy Thomas Baker. This bubbled under the Top Fifty – and three further singles were ‘ radio and turntable hits’ in discos across Europe.

After the dissolving of Sunfighter in 1978, Rob freelanced as a songwriter and producer prior to founding his own record label, Stiletto and then The Bank, a West End audio-visual company, turning over millions, year in, year out, whose promotions division spawned TV commercials for well-known manufacturers of lager, carpet cleaner and mobile telephones. “ I was writing and producing the soundtrack for TV and Cinema commercials for Peroni, Pilsner Urquell, Vax and Cancer Research.”

Then, shortly after the turn of the millennium, Rob in deep middle age struck out in his own right through the formation of Rush Music, a company that, chiefly by word-of-mouth and non-aggressive, even non-existent advertising, furthers the causes of diverse musical talents, irrespective of potential for popularity or financial gain. Output has included two Boughton albums – 2015’s critically-acclaimed Time and Emotion – and this autumn’s Short Stories, Tall Tales – in which a tidy-minded listener might also detect all manner of reference points – traceable to an immersion in 45 rpm pop from earliest youth.  Nevertheless, there’s an intangible element peculiar to Boughton alone, not least through cleverly unpredictable arrangements by a past master at balancing the serene and the dramatic. “I see myself, first as foremost a songwriter and I like to constantly challenge myself to write in very different styles. I think this is apparent on my two albums”